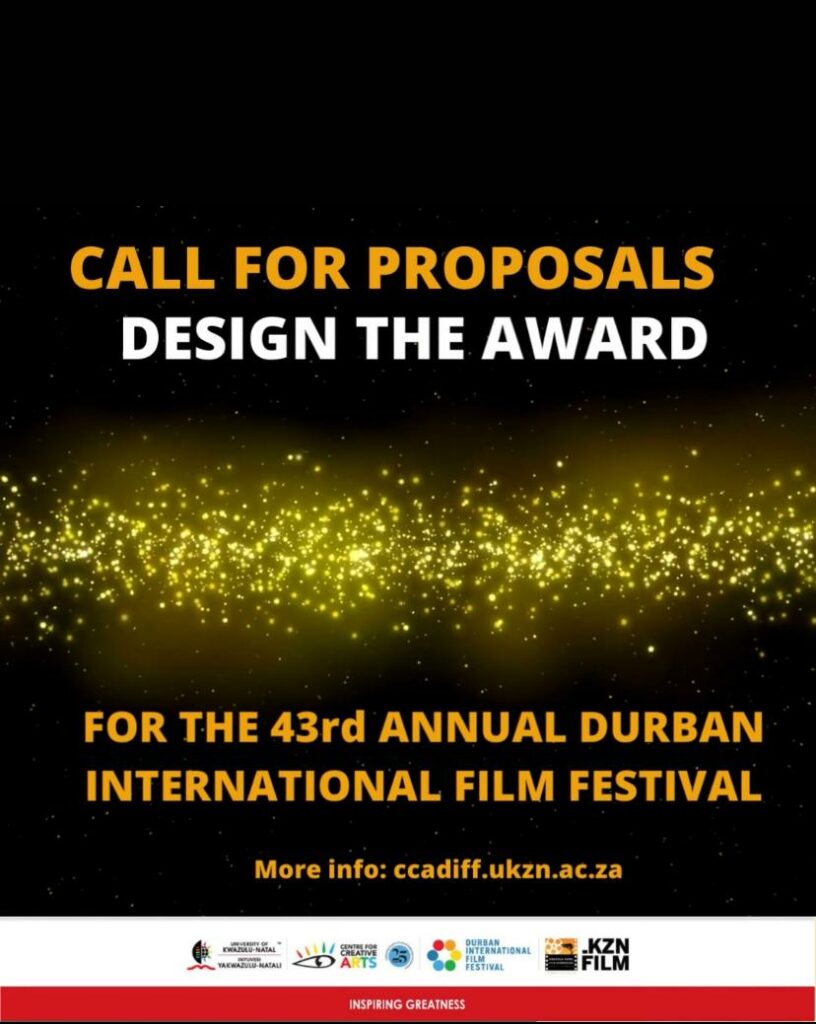 South Africa’s longest running film festival, the Durban International Film Festival (DIFF) is widely regarded as one of the leading film festivals on the African continent and a vital event on the international film calendar. Whilst celebratory of excellence in film-making, the Durban International Film Festival is committed to ensuring that emerging filmmakers are also afforded a platform to advance and showcase their work. This is an imperative step towards developing the industry in Africa.

The commissioned design will be symbolic of the Festival’s quest for excellence, commitment to the development and vitality of the film sector. The design must have a distinct identity and African aesthetic that can be associated with the Festival and its brand.

The 20 awards will be presented in the following categories:

The design of the Durban International Film Festival Awards must be a piece of artwork of striking visibility, and it should generate industry-sector pride. The award should be inspirational, celebratory and have an African aesthetic.

The award can be a two or three-dimensional artwork in any medium, including wood, glass, copper, metal, ceramic, framed drawings or paintings, etc. The award should have presence and visual impact. In addition, the award should be able to be customized with credentials (the award category, year and recipient’s name) as part of the artwork or as a plaque affixed to the piece. The trophy should not be more than 25cm in height and 3.8 kg in weight.

In the event that the organisers decide to adopt the design as a consistent brand for a number of years, the artist will be paid a royalty and creation fee for each year that the design is used as the Award.

In addition to a one-time design fee of R10 000.00 awarded to the successful bidder, the proposals should include the cost, per award, to produce 20 awards using the proposed design. The maximum total budget per award, including all materials, production fees, and taxes, should not exceed R1 000.00 per award. The artist will also be awarded a budget for courier or transportation of the awards to the offices of the Durban International Film Festival.

The following are relevant dates for submissions for designs for the 2022 Durban International Film Festival Awards:

An adjudication panel comprised of the Centre for Creative Arts film festival team along with a select group of experts with film, visual art and branding expertise.

The panel shall adjudicate the proposals and decide on the artist and design based on the following criteria assessed from the artist’s proposal:

Does the artist provide a portfolio of evidence of having the knowledge and skills required to design, create and deliver commissioned artworks on time and on budget

Does the Award proposal have artistic merit?

Is the proposed Award design contemporary, innovative and unique?

Is the Award design inspirational, celebratory, representational of the film industry?

Does it have an African aesthetic?

Is the proposed budget realistic and achievable

Are the proposed materials for the award durable, eco-friendly and locally produced?

The Durban International Film Festival (DIFF) is an annual film festival that takes place in Durban, KwaZulu-Natal province, South Africa. Founded in 1979 by Teddy Sarkin and Ros Sarkin, it is the oldest and largest film festival in Africa and presents over 200 screenings celebrating the best in South African, African, and international cinema. The festival had positioned itself as a platform for protest during Apartheid. The festival had established ties with the Avalon Group for many years.

All submissions should be formatted as a single PDF, sent electronically to GamedalaS@ukzn.ca.za   and contain the following, corresponding to the outline below:

Award proposal (3-page maximum) outlining the artist’s inspiration and intent for the Award; note actual size, materials to be used, and an explanation as to how the artist plans to integrate Award credentials into the design. All submissions should include sketches of the proposed design.

The proposal must be able to demonstrate that the artist has the capacity to produce the quantity required within the time frame and budget indicated.

The proposal must include a budget for the proposed project. The maximum total budget, per award, including all materials, production fees, and taxes should not exceed more than R1 000.00 / award.

The proposal must include a maximum of 5 photographs from the artist’s portfolio of previously created work, and which speaks to the artist’s ability to design an Award. The photograph must be labelled with artist’s name, title and description of work, date created, medium(s), budget (if applicable), and dimensions for the artwork.

Reserved Rights: The Durban International Film Festival is not obliged to accept any of the submissions and reserves the right to not recommend any proposal or finalist, or to terminate or re-advertise the project.

If you have questions about this opportunity, please contact: