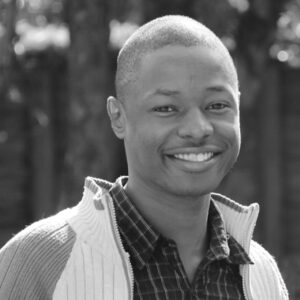 Eugene “Ramirez” Mapondera is the creative director at Kay Media Africa and Co-founder of Comexposed, a creative hub for digital artists in Zimbabwe. He is an accomplished animator and illustrator, having worked in film, advertising, and publishing for over 14 years. He has been the go-to storyboard artist for over 20 indie films & music videos from Australia, the USA, Canada, and the UK, including The Secret Princess (UK, 2016) and Boston (USA, 2014). Eugene is an active content creator and commentator on African pop culture and technology. 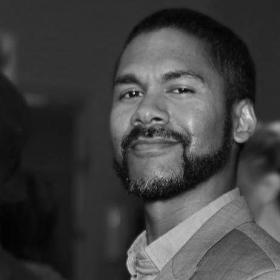 Ryan Fortune is a radio & newspaper journalist, screenwriter and producer of documentaries, fiction films and television series. He co-produced Triomf, a feature film that won Best South African Film at DIFF in 2007, and was also a co-writer on When We Were Black, a 4-part SABC mini-series that won 7 SAFTA awards in 2007. As a commissioning editor at SABC TV Content Hub, Fortune oversaw the production of several award-winning entertainment shows, including Street Journal and Real Goboza. He has also worked as a social media writer for First National Bank (FNB) and was most recently (2015 – 2016) the Field Communications Manager for Doctors Without Borders / Medecins Sans Frontieres (MSF) in South Africa. 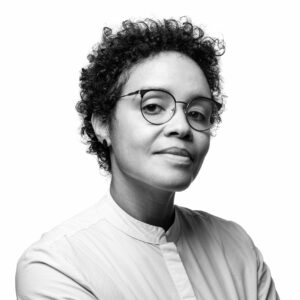 Sophie Haikali is an award-winning Congolese-German producer based in Namibia. Over the past ten years, she has written, conceptualised and (co)produced films and commercials all over Africa at Joe Vision Production CC. She has also worked on numerous international film productions shot in Namibia, such as a Daily Show segment, the documentary “Atlánticas”, and the German TV film “Okavango-Leben am Fluss”. Her latest projects include the co-production “Pepe, Imagination of the Third Cinema” (Namibia-Dominican Republic-Germany-France), which received Berlinale World Cinema ACP funding and the German cinema film “A place in the sun” by Lars Kraume. Her last short film Invisibles KaunaPawa was considered for the Oscars shortlist 2022.

Haikali holds a Bachelor’s from the University of Namibia and a Master’s in Media Culture from Maastricht University. Samples of her work can be viewed on www.joe-vision.com 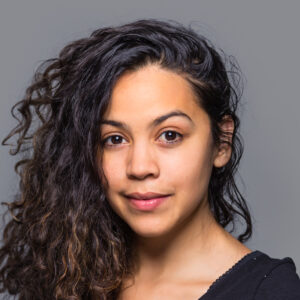 Kelly-Eve Koopman is a queer writer and change-maker and, perhaps with some shyness, would describe herself as an artivist. With a background in theatre, she has played many roles and worn many costumes. She is committed to exploring the expansive and rich symbioses between creative expression and art and social justice work. Kelly-Eve Koopman is an Atlantic Fellowship for Racial Equity alumnus and was also proudly a member of We See You, the queer collective that occupied a Camps Bay mansion at the end of 2020 during the Covid Lockdown period in South Africa. Kelly-Eve Koopman has written and published many works, including her debut memoir Because I Couldn’t Kill, published by Melinda Ferguson Books, long-listed for the Sunday Times National Book Award in 2021. She is also the co-curator of the publicly acclaimed LGBTQI anthology They Called Me Queer and is the co-curator of the new continental Speculative Fiction anthology e-book, Our Move Next. Koopman currently works in TV and film and continues to create and facilitate opportunities for radical imagination work across different forms and modalities. 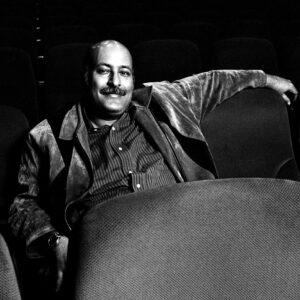 Born in Cairo, Sherif M. Awad is an art/film/video curator who has worked as a programmer and communications manager since 1993 at Cairo International Film Festival, Alexandria Film Festival for Mediterranean Countries and Luxor African Film Festival in Egypt. Between 1993 and 2000, Awad worked as Marketing Manager in the Egyptian regional offices of Fox/Warner and UIP. In the last few years, he curated Arab and foreign film/video programs in several European countries, including Italy, Sweden and Ireland, and the Egyptian Contemporary Art Gallery Darb 1718. In addition to his contribution to several specialised publications, he was Chief Editor of both The Ticket Entertainment Magazine and the art journal Contemporary Practices. He is currently holding the position of the Film/Art Editor of Egypt Today Magazine; the leading English published monthly magazine in Egypt. Awad also contributes to Westchester Guardian in New York and Variety Arabia in Dubai. In broadcast media, he is also a writer/producer for film/art TV shows on satellite channels broadcasting in the Middle East region, including the weekly program Cinemascope airing on Dream TV. In the last few years, Awad has covered international festivals like Berlin, Cannes, Istanbul, Taormina, Rome, Dubai, Oran and Tribeca for both TV and printed media. He is a member of FEPRESCI and FEDEORA associations of film critics and was a jury member in Pula, Orenburg, and Cinedays Macedonia festivals, to name a few. 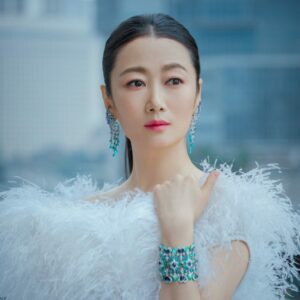 Tao is a Chinese actress and producer that graduated from the Folk Dance Department of Beijing Dance Academy. She started her acting career in 2000. In 2006, the film Still Life, starring Zhao Tao, won the Golden Lion Award at the 63rd Venice International Film Festival. And in 2012, as the leading actress in the Italian film Io Sono Li (Shun Li and the Poet), she won the David di Donatello Award for the Best Actress. She was one of the juries of the 7th International Rome Film Festival and the 22nd Shanghai International Film Festival. Other films she appeared in include A Touch of Sin, Mountains May Depart, Ash is Purest White and many more. She also produced Useless (by Jia Zhang-ke, 2007) and Swimming Out Till the Sea Turns Blue (2020). 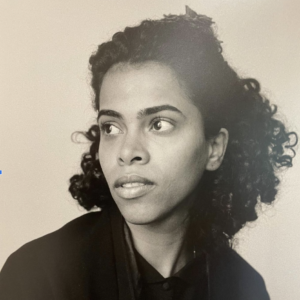 Eman Hussein, born in 1994, is an independent dancer, choreographer, and dance filmmaker based in Cairo. Her works merge labourers’ daily movements and contemporary dance, among other arts. Working with individuals outside of art institutions is her main inspiration. Her dance films combine aspects of public space and contemporary dance movement.

She is interested in merging all the arts she is learnt so far, as she seeks to create artistic visual works of Contemporary dance, Martial arts, and Theatre. She is passionate about the body’s natural movements in public spaces and workspaces through experimenting with movements in spaces and attaching them to creative visual cues. 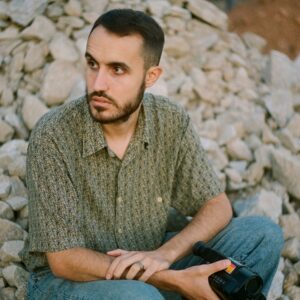 Guillem Almirall is a director from Barcelona (Spain), born in 1993. He studied cinema at the ECIB school and has directed seven short films, such as ‘The patience of the water’ (2016). He currently works in a collective creative studio called ‘El Ojo Tranquilo’, developing his first feature film. 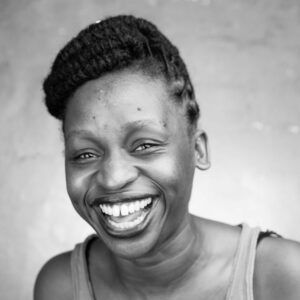 Tiny Mungwe is a filmmaker and arts manager. As a filmmaker, she currently works as a producer at STEPS (Social Transformation and Empowerment Projects), where she produces Generation Africa, a pan-African anthology of 30 documentary films from 17 countries in Africa on migration.

Her early career was in radio, where she started on campus radio at Tuks FM and later worked as a producer and co-presenter on KZN regional radio station P4 Radio’s breakfast show Breakfast with the Girls, presented on East Coast Radio.

Mungwe studied film and television production at Movietech Film and Video College and AFDA School of Motion Picture. She wrote, produced and directed Akekho uGogo, a 48 minute documentary about urban youth culture, which screened at several festivals, including the Durban International Film Festival, Apollo Film Festival and DOKANEMA Festival. Her short film script Evelyn was selected for the NFVF Women Filmmaker Project, and she directed another short film in the programme, Daddy’s Boy. She was a writer on the SABC drama Muvhango and the e.tv series Matatiele. She worked as a director on the leading South African show, Uzalo.

Mungwe worked for several years as manager of programmes at the Centre for Creative Arts (UKZN), where she organised four international cultural festivals, including Time of the Writer, the Durban International Film Festival, Jomba! Contemporary Dance Festival and Poetry Africa. She worked on the Industry programme of the film festival overseeing the programme of the Durban FilmMart (a film co-production market of the festival) and Talents Durban (a career development programme for emerging African filmmakers).  She currently continues as a programme curator for the DFM. She also programmed and curated the city of Durban’s inaugural book and art fair, ARTiculate Africa, in 2016. 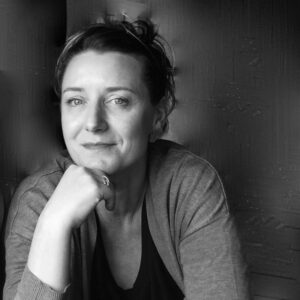 Lara Colucci is a founding member of Storyscope, serving as legal and business affairs director. She is also currently engaged in the legal advice on strategic business worldwide related to legal management of media companies, development and production of original content, licensing and distribution.

She trained at the University of Sao Paulo and Getúlio Vargas as an Intellectual Property and  Media/Entertainment Law Specialist and was the Legal IP Manager for 13 years at Abril Group, one of the largest media groups in South America.

She kickstarted her filmmaking career in 2015 as a producer and legal advisor at her own production house Fireworx Media Brasil. Her first film as a creative producer was  the documentary “The March of the White Elephants”, a co-production between South Africa and Brazil. When she relocated to South Africa to work at Storyscope, she worked on the international co-production between South Africa and Canada, the feature documentary “Influence”, directed by Diana Neille and Richard Poplak, which premiered at  Sundance in January 2020.

She is co-producer on the Netflix true-crime documentary series, “Senzo: Murder of a Soccer Star, ” released globally in April 2022. 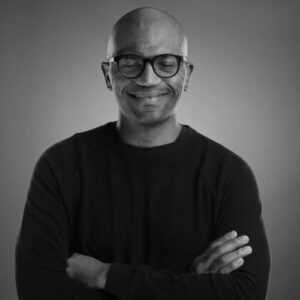 Mpho Twala comes from a producer background and spent six years honing his filmmaking craft in Belgium. These experiences, along with an innately discerning eye and a love for collaboration, have laid the foundation for where he is now. He is a selfless mentor committed to transforming the local industry one frame at a time. He is defined by his impeccable work and love for his family, the sport, and generous demeanour. 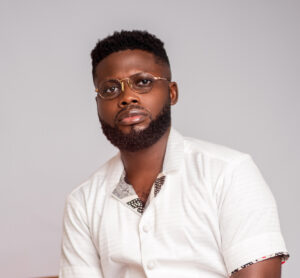 For the past thirteen years, Bright Boakye-Danquah has been responsible for bringing creative ideas to life behind the camera as a creative producer leading blue-chip productions that touch hearts and change minds. He can employ persuasive communication skills to influence public perceptions, deliver inspiring stories and contribute to the evolving narrative of African identity. Boakye-Danquah has worked with diverse teams in Ghana and those from Pakistan to South Africa to London, which enabled him to unearth new talents, hear new stories and employ new technical skills. He is always looking to meet new and exciting people with whom he can share his passion for film and learn something new. His greatest asset is his ability to liaise with people of various backgrounds to find common ground and build lasting relationships.

His journey into film production has been quite serendipitous. He originally planned on studying business, but film and production have been a part of his family lineage for years. After submitting stories to his uncle, he was invited to assist on set, which sparked his interest. He is grateful for this life-changing opportunity, spearheaded over 13 years in the industry doing everything from print media to radio spots and jingles to leading major documentaries, feature films, and over a hundred commercials.