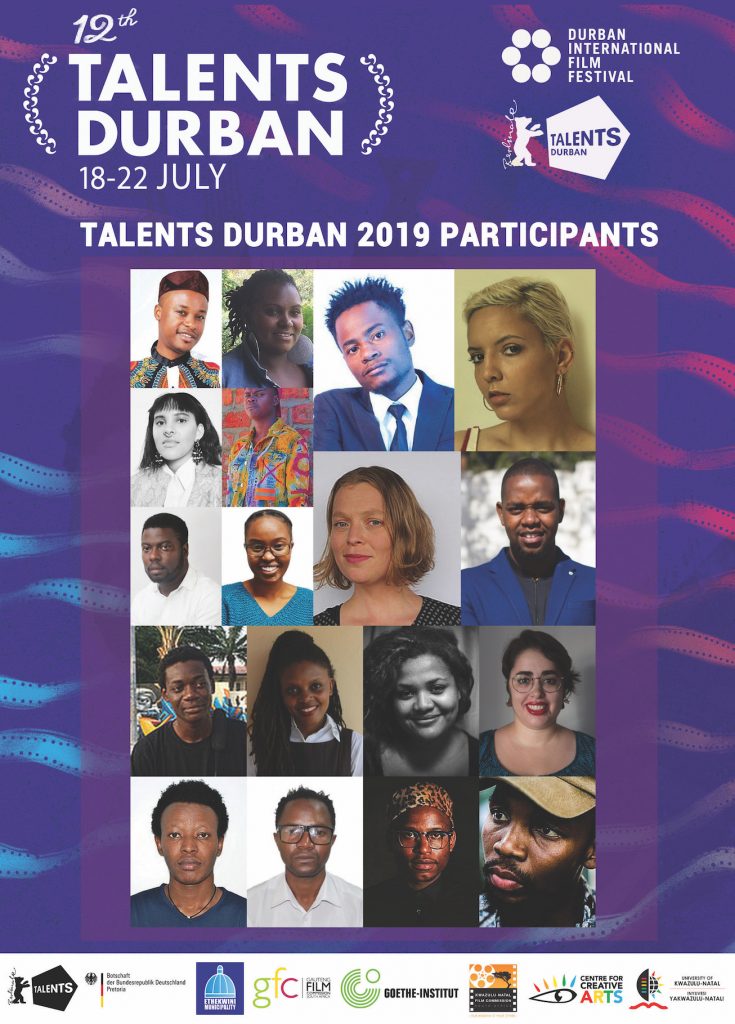 40th Durban International Film Festival (DIFF) and Durban FilmMart (DFM) are proud to announce the participants of the 12th edition of Talents Durban, within the official DIFF/DFM programme.

Talents Durban is a five-day development programme presented in cooperation with Berlinale Talents, an initiative of the Berlin International Film Festival, made up of workshops and seminars for African filmmakers, delivered by film industry professionals and academics.

After a rigorous selection process, 15 filmmakers and 3 film critics from 12 countries across the continent made the final cut, which consists of; 3 features, 3 TV/web series, 3 animation, 3 documentaries, 3 shorts films, and 3 film critics:

And Who Will Cook? (Cape Verde) Director: Samira Pinto

“The 12th edition is presented under the theme of “A Journey to Authenticity” inspired by the present moment in African cinema,” explains Menzi Mhlongo, Talents Durban Co-ordinator. “Following a global renaissance of African cinema and television content, the demand for stories from the continent is rising. African storytellers and audiences seeking to connect with African cinema also have to grapple with the question of what is ‘authentic’ African cinema. For the filmmaker this question has a far more inward dimension as well – before the auteur can offer the answer to this question they have to ask the question of themselves – what is authentic to me? With a four day programme of masterclasses, mentorship and networking on offer, we are looking for the best voices in African cinema- storytellers who represent the future of what it means to have an “Authentic Voice” – to join this pertinent conversation.”

Participants will interact with over 600 delegates from the DIFF and Durban FilmMart, the co-production and finance forum, which take place from 19-22 July during the festival. The Talents will also get to be part of several project-oriented, hands-on skills development programmes. Practical development programmes within Talents Durban include Story Junction, masterclasses, and one-on-one mentorships.

Story Junction is a platform showcasing projects linked to the festival. Talents will present their project at Story Junction to peers and industry delegates. Delegates will be able to request meetings with participants whose projects they wish to engage with further.

Each of the Talents will receive a mentor for an intensive programme of one-on-one consultation, and the entire group will engage in project and strategy development workshops. The mentors selected are experts in their respective fields (e.g. documentary, fiction, drama series, web, mobile content, TV and animation) that suit the needs of the participants and their projects.

In collaboration with the Durban FimMart, Talents will have access to the inaugural Durban Does Docs conference, the Locations Africa Exhibition, a programme on women-led film hosted by Sisters Working in Film and Television (SWIFT), and a selection of masterclasses, seminars, workshops, labs and networking opportunities for filmmakers.

Talents Durban is one of 7 Talents International Programmes formed by Berlinale Talents in Africa and around the world including Talents Beirut in Lebanon, Talents Buenos Aires in Argentina, Talents Sarajevo in Bosnia-Herzegovina, Talents Tokyo in Japan, Talents Guadalajara in Mexico and Talent Press Rio.

The 40th Durban International Film Festival is organised by the Centre for Creative Arts at the University of KwaZulu-Natal, with support from eThekwini Municipality, KwaZulu-Natal Film Commission, the National Film and Video Foundation, German Embassy, Goethe-Institut and a range of other valued partners.